High-Level Planning
A video-game-like interface allows operators to manage the most complex UAV missions in a simple, intuitive way. Users focus on the mission objectives rather than flying an aircraft.

Network-Centric
SharkFin is based on STANAG 4586 and can control any compliant UAV. Many SharkFin workstations can run simultaneously on a network, allowing many users to share control of aircraft and payloads during a mission. Every user has access to streaming payload video, and can control payloads through simple mouse clicks directly on the geo-referenced video display. 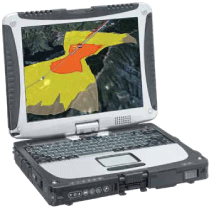 Technology is transforming how humans and machines work together. That’s why Lockheed Martin is investing in the development of optionally-manned and unmanned systems that serve as a capability multiplier. Because we recognize that the question isn’t just about who’s the best person for the job—it’s about what’s the best team for the mission.